A complete guide to all the kinds of Roulette out there

Roulette tables can appear to all be the same to those who have never played before. And once a beginner sits down at a table or enters the online casino app to give the game a go, they could end up confused with so many options to wager on, and it could be hard to determine a possible outcome out of what they do with their wagers. 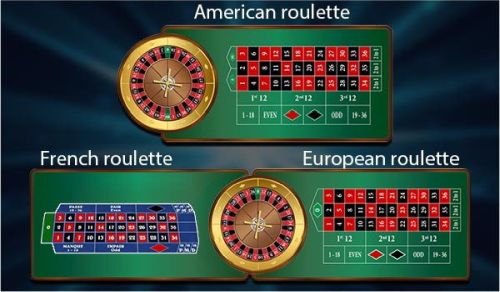 And in addition to all that, you may come across the whole trio of the configurations of the roulette wheel in the very same venue: be it French, European, or American. Then in some occasions you could also find the rarer option of playing a version of the game which involves a third zero.

The configurations of the 3 primary varieties of the game and how to play them will be explained throughout this article. But first , let’s commence with the fundamentals:

The configuration of the game;

The player faces a table with a number of boxes spread across it. First thing to notice would be the grid numbered 1 to 36, half of which coloured red, and the other half in black, as well as an extra green box or two on the side with a zero for European Roulette OR a zero & a double zero for American Roulette

The player can either wager within these squares,  or on the lines between them, covering multiple squares with a single bet (Playing on the lines increases your odds of hitting a win by double or four times depending on whether you go for a line between two boxes or  a corner or cross between four.)

It is also possible to put even higher odds bets, up to 50/50, with three more options given at the side of the table (odds vs even / 1-18 vs 19-36 / Red vs Black)     You can also mark a certain area of the table by placing your piece at an edge to wager on the winning number being in a specific area of the board.

What factors go into the determination of the final winner? By a ball that spins around the edge of a revolving wheel until it lands on one of the numbers marked in the middle of it  . Anywhere the ball drops throughout the wheel’s numerical sections, along with the 0s, determines the winning number.

Think you got the hang of it? Hold on there for a second. Roulette table configuration differences are another key factor to be explained to gambling newbies.

The configuration of the European roulette wheel

The European variant of roulette, found in both brick-and-mortar and the best online casino Canada has to offer, is one of the most successful. The player has  the 36 standard numerals, divided into Twelve rows, with a lone ‘0’ at the edge. As a result, even if you may receive 35:1 chances on single number bets, the chances are really 36:1 when you include the green zero segment since there are 37 segments in total, but this is what gives the casinos what they call an edge for the house.

The player may also place chips on the box that’s labeled ‘0’ and bet on it just like you would any other number. One should also keep in mind that r , or any of the other 50/50 bets, you will lose your whole stake if a zero is drawn. Painful.

Set up on a traditional table of Roulette from America.

The Europeans constantly say that Yanks prefer going at everything larger and nicer than their counterparts in other countries. However, in the instance of this particular game, the United States introduced a separate green 0 section, this one with two zeros instead of one. However, even if there are more opportunities to bet on, it does not suddenly mean that it is superior.

The chances of winning in U.S. roulette are lower than in the European version. Despite the fact that there are still 36 choices to pick from, there are two separate sectors to contend with. There is a considerable drop in your chances of striking a direct figure from 35:1 to 37:1.

The arrangement of the digits on or around the disc in American roulette is a notable change from Euro Roulette, but this does not in any way affect your chances.

a roulette wheel in the French style

This is a good thing for the players thanks to the French. There is just one green zero in French roulette, as in European. If a green nought appears, however, it does not indicate that the bets placed by the participants are wiped out (50:50 bets).  Alternatively, such wagers are credited for half of the normally lost chips back from their wager, which means if you bet 100 on black and it lands on zero, in French Roulette, you will still come out with 50 in your hands.

Here you could also use an alternative rule called ‘in prison’ which lets you lock your bet on the same colour for the next round, giving you a ‘double or nothing’ – like chance.

The configuration of a three-zero roulette wheel

As a way to earn more revenue for casino companies and gain a little more house edge, triple zero tables were initially introduced. We all know where this is going, don’t we? You are correct, there is a third green 0 section on the board with a triple 0 on it. Obviously, this means that your long-term chances of winning are considerably lower than they are for all the other roulette tables.

PlayRoulette.org » For Dummies » A complete guide to all the kinds of Roulette out there

Gamble Responsibly
18+. Gamble responsibly. Don't blindly trust our tips - we're just giving our opinion. Make up your own mind. If you're a gambler we advise reading GambleAware.org to help you understand gambling more and what the repercussions of it can be.

Practically every player who is new to Roulette will come up with their very own betting system.

However this betting system is not new at all. It's known as The Martingale Betting System and has been in existence for over 250 years.